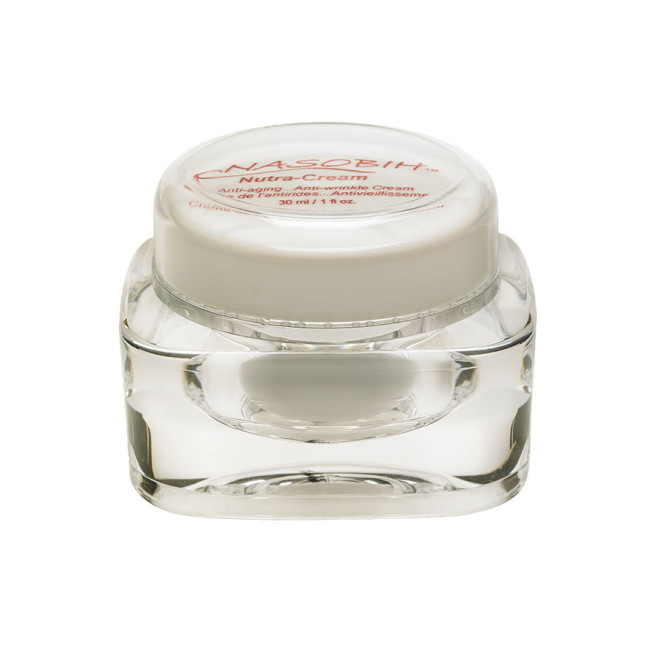 Nasobih™ Nutra-Cream is a bioactive skin cream for the face and neck that contains nature’s most potent ingredients that have been scientifically proven to protect the skin from damage caused by free radicals (the culprits in premature aging). Oxidative damage causes most visible signs of aging in our Skin. By preventing this damage, skin will stay younger looking.

Apply to face and neck morning and night before other products to protect the skin.  Moisten skin first, we recommend a fresh mist with Nosobih™ alcohol free toner  before applying cream. Nasobih™ Nutra-Cream will penetrate deeply into the skin providing key nutrients to skin cells that will reduce the effects of aging.

Tip –  Enhanced results may be experienced by taking Nasobih™ Protovin One or Nasobih™ Nutra-Caps orally each day along with applying the Nutra-Cream topically.

Rose Hips
Suitable for applying to all skin types, but it is especially valuable for dry, sensitive or aging skin. It has a tonic and astringent effect on the capillaries just below the skin surface, which makes it useful in diminishing the redness caused by enlarged capillaries. (See “Rose Hip Seed Oil” )

Elder Flowers
Has a long history of use dating back to the 5th century BC. Hippocrates wrote about elder. Ancient Egyptians found that applying elder flowers healed burns and improved the complexion. Biological agents in this herb include: triterpenes, linolenic and palmitic acids and flavonoids, including rutin, quercitin and kampherol.

Echinacea
Contains echinosides, antioxidants that limit the damage done to the skin by free radicals. Echinacea promotes wound healing, is an anti-inflammatory, and is effective for treating acute and chronic skin problems. A number of compounds in Echinacea have shown a ability to protect collagen against the effects of free radicals, suggesting that Echinacea may have value in defending skin against sun damage.

Rosemary
A powerful antioxidant containing phenolic diterpenes that have been shown to protect biological systems against oxidative stresses, particularly against lipid peroxidation (rancidity). It also contains the flavonoid, diosmin, reputedly more effective than rutin in reducing capillary fragility and therefore preserves capillary strength. Rosemary is an anti-aging and firming agent.

Aloe Vera
Contains seven electrophoretically-identifiable superoxide dismutases (SODs): complex, potent antioxidants which target a variety of free radicals. Aloe Vera has been shown to enhance and renew collagen, heal wounds, burns, and sunburns. It contains over 200 active ingredients, including a variety of amino acids, enzymes, vitamins (including C and E), and minerals. It has been shown to have anti-aging, firming, healing and rejuvenating properties.

Clary Sage
Emotionally helps with calming and centering while decreasing anxiety, nervous tension and fear. It is helpful in treating chronic skin conditions and wrinkles and has anti-inflammatory and antiseptic properties.

Geranium
Emotionally helps with decreasing anxiety and nervous tension and helps with finding emotional balance with increased concentration. It has anti-inflammatory and antiseptic properties and is helpful in treating chronic skin conditions.

Sweet Orange Oil
Emotionally uplifting, invigorating and cheering while having anxiolytic properties. It has anti-inflammatory, antiseptic and anti-wrinkle properties and has been found useful in treating chronic skin conditions.

Grape Seed Oil
A mixed oil containing omega 6, omega 9 and omega 3 fatty acids. It has the highest content of linoleic acid of all vegetable oils but also contains a lesser amount of oleic acid. It is a rich source of mixed Vitamin E and other lipid soluble antioxidants. It has been used in the cosmetic industry for some time because of these constituents and also because it works well as a flow agent.

Evening Primrose Oil
A rich source of gamma linoleic acid (GLA) which is a precursor in the production of anti-inflammatory prostaglandins.

Rose Hip Seed Oil
Contains high levels of essential fatty acids primarily as omega 6 and omega 9 compounds. Also contains a trans retinoic acid (form of Vitamin A), trentinoin, which has been found to be very effective in causing photo damaged skin to rejuvenate without the complications seen with other retinoids. It is an anti-wrinkle, anti-aging product.

ProtovinTM (grape seed extract )
Protovin is a high quality grape seed extract (GSE). Because it is produced in the traditional manner through ethanol extraction, its composition has not been artificially altered through chemical manipulation. The result is a wider spectrum of proanthocyanidin activity that more exactly mimics the spectrum found in nature. GSE is water soluble, passing quickly across the cell membrane to reside in the cytoplasm of the cell. It is a powerful antioxidant and is a potent rejuvenator of the water soluble form of Vitamin C as well as exhibiting strong anti-inflammatory properties. GSE has particular affinity for the connective tissue components of the cellular makeup and has been found to be effective in returning these tissues to a more “youthful” state of being after they have suffered from age-related damage.

Ascorbyl Palmitate
A pH neutral, lipid soluble form of Vitamin C that is rapidly absorbed into the skin and taken up in the lipid cell membrane. It is absorbed by the skin and retained 10 times more effectively than is ascorbic acid (water soluble Vitamin C). In one study it was found to be 30 times as effective at suppressing tumour cell growth as ascorbic acid at one quarter the dose. Being present in the lipid cell wall, it is constantly available to rejuvenate Vitamin E as opposed to the ascorbic acid form of Vitamin C which can only do so at the water-lipid soluble interface.

Vitamin E (as d-alpha-tocopherols)
This is a natural sourced Vitamin E and as such is more bioactive. The complete form of Vitamin E is composed of both tocopherols and tocotrienols. The human liver seems to favour the tocopherol form in its metabolism and it is this form that has been marketed to the public as Vitamin E. Vitamin E works best in its mixed form and we have included the tocotrienols in this formulation through the cranberry seed oil, the Vitamin E components are completed with the addition of this tocopherol. Vitamin E is a lipid soluble antioxidant and so is particularly effective in the skin, which has a high lipid content. Vitamin E is an immune booster and has anti-inflammatory properties.

Co-Enzyme Q10
This lipid soluble substance is found in all cells of the body as it is a vital component of the Krebs cycle, that biochemical process that produces energy in the cell. This substance is vital as a co-enzyme as well as an antioxidant. It is the most potent regenerator of the other lipid antioxidant, Vitamin E. It is most concentrated in the mitochondria of the cell where it fulfills its two roles, assisting in the production of energy through a biochemical process of oxidation and acting as an antioxidant and protecting delicate cell tissue from the damage caused by free radicals. With age, the concentration of this substance decreases in the body and so there is increased need for supplementation. This substance is included in NASOBIH’s Nutra- Cream formulation to enhance the effectiveness of the Vitamin E’s antioxidant properties.

Alpha Lipoic Acid
The only jointly lipid and water-soluble antioxidant. Because of this unique feature it has access to all parts of the cell where it is able to act as a potent antioxidant in its own right. It rejuvenates Vitamins C and E, glutathione and coQ-10 from their free radical form back to their active antioxidant form, and is able to transform itself by tapping into the cell’s energy production system, the only antioxidant able to do this.

Methylsulfonylmethane (MSM)
A naturally occurring sulfur-containing compound that is found throughout the plant and animal food chain. It is the body’s preferred source of sulfur. Sulfur is mandatory for the production of glutathione, many enzymes and some amino acids, the building blocks of proteins. It has the same chemical structure as dimethylsulfoxyoxide (DMSO). It acts as both a powerful antioxidant and anti-inflammatory.

Polyenylphosphatidyl Choline (PPC)
An unsaturated phospholipid that occurs naturally in lecithin and is important in stabilizing the lipid cell wall of all cells, especially those of the skin. This membrane tends to become more rigid with age due to oxidative damage caused by UV radiation and in this state does not function efficiently in allowing molecules to pass into and out of the cell. PPC has potent antioxidant capabilities and acting within the lipid layers of the cell membrane is able to repair other phospholipids which have been damaged thus stabilizing and revitalizing the cell membrane. PPC is very rapidly absorbed through the skin so much so that it enhances the absorption of other compounds concurrently on the skin. It has both antioxidant and anti-inflammatory properties.

Dimethylethanolamine (DMAE)
A precursor to acetylcholine one of the major neurotransmitters at the nerve-muscle junction. As we age we produce less acetylcholine and so there is less stimulation of the associated muscle. Less stimulation in the muscles of the face results in less tone of the skin. DMAE helps to restore neurotransmitter activity and thus improve skin tone.

Emulsifying wax NF
– is a plant-derived emulsifying and thickening agent.

Hydroxyethyl Cellulose
A water soluble cellulose derivative. It is used as a thickening agent and has been GRAS (generally regarded as safe) approved by the US FDA ( US federal drug administration).

Green Tea
Clean, fresh smelling scent, rich in polyphenols and flavonoids, to assist in combating free radical damage. Green tea is one of the most potent antioxidants in its own right.

Nasobih™ Nutra-Cream is thicker then most anti-aging creams and has a pinkish-tan skin tone coloration because it contains physiological amounts of active ingredients.  Some of the antioxidants we use such as Protovin™ grape seed extract are highly colored in their natural state. Because of this, our scientists realize that many marketed  white or very pale antioxidant creams may not contain enough active ingredients to be effective.
Share